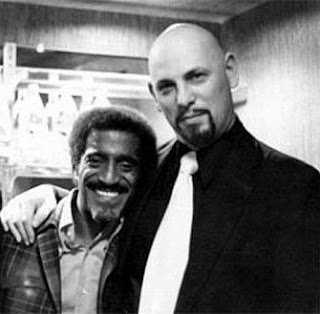 "Satanism? You sure picked the whitest religion to join!"

Said a friend of mine, in jest, when I disclosed to him my membership in the Church of Satan. I chuckled at the joke, it did get me thinking as to why there are so many melanin-challenged individuals within the ranks of the Alien Elite. Not that this is a pressing issue, mind you, but it is something I have thought about. I have heard this sentiment shared before from others. So I, dear reader, as someone who is a mutt of a Satanist, will, to the best of my ability, probe into this matter.

Satanists are born, not made. This is a common adage amongst Satanists, and I believe it stands true. The trait is rare amongst humans, most of which can be nothing more than—as Magus Gilmore puts it—“Media Bessoted drones." (from his essay, Satanism: The Feared Religion) And what in the media is being more and more discussed? Race. I tire of such discussions, but somebody has to do the dirty work, so I guess it is going to be me.

Admittedly, there is a considerable amount of Satanists who are white. So there you have it! The Church of Satan is a jackboot wearing, Fascist loving, Nazi banner waving, a haven for skin-head ne're-do-wells who believe that the 'white man marches on!' If one were to believe the ethnic hucksters and race-baiters, this might seem to be the case. Because there are "just so many whiteys hailing Satan, and whatnot!" There is a much simpler and less scandalous reason for this.

Simply put, it is a demographics game.

Satanism is, primarily, an American religion. While there are Satanists around the world, the bulk of its membership is in the good old US-of-A. So, with that being established, who is the primary majority ethnic group in America? White people. People of European descent are more likely to pick up the little black book and find themselves in the Satanic Bible. Simple math. There, end of discussion. Wait, still not satisfied? I feel a retort is coming down your nitpicking pipeline. Again, I am in a generous mood while writing this down, so I will delve deeper and use myself as an example.

I am a mutt, a mixture of a Western European father, and an African mother. And these very same High-Yella hands picked up the Satanic Bible, read it, and found me within its pages. The racial makeup of the Church of Satan played no part in my decision to join. I simply wanted to support the organization, which exemplified the philosophy of Anton LaVey to the best of its ability. Because I found value in it.

I also find it insulting to me that I must adhere to a particular religion simply because it is "black" to do so. So guess I should bust out the tambourine and become a Baptist. How about a bow-tie wearing, (and I love bow-ties regardless) stone-faced, Nation of Islam member? Better yet, let me go back to the roots and just join a Vodun family complete with rituals and possessions by Loa. (On a side note, Voodoo is fascinating stuff, research it when you have the time)

I find it funny that so much attention is given to my "blackness" (even though I am mixed) and not me as an individual. This is a pressing problem within African-American communities for individuals who do not toe the line. Don't believe me? Converse with a black goth or metalhead, and you will hear the same grievances. I may have grown up in the inner-city, but I never quite fit the mold of what is expected of such a denizen.

First of all, I was—and still, am in some ways—a huge anime nerd. I loved Japanese pop-culture and was scouring my local library for all things anime and manga. I loved RPG's, so while many of the other kids in the hood were playing games like Madden and Grand Theft Auto, I was hooked on the Final Fantasy series and strategy games. I was a chess nerd, a Lord of the Rings nut, and was going gaga for all things Pokemon. My mom did not let me listen to rap, and I was instead introduced to the classic rock stylings of the Beatles or the rousing symphonies of Stravinsky.

Needless to say, my eclectic tastes led to much persecution as a child. Not from the white kids (although I had a few enemies) but mostly from the black ones. I was taunted for not being "black enough" or "acting white." I was even persecuted for my first kiss being with a Chinese girl. She was cute, I liked her, and she liked me, so sue me if I wanted to kiss her! What's a teen boy to do?

As for this whole "acting white" malarky that has become such a staple of the black vernacular; Please, tell me, how does one act white? It is degrading to say that being interested in literature, liking classical music, and speaking proper English is something that only people of European descent do. Sorry for raining on your narrow-minded parade, but intelligence should never be measured by the pigmentation of your skin color.

Satanism is terrific because it looks at the individual. Merit, not inherit, is our credo, and we only want people who can think. The Church of Satan will take a smart black (or brown, Asian, etc.) person who can reason and think for themselves over a white idiot conformist, any day of the week. With the church, you do not have a race-based passport to the Infernal Empire just because you have ancestors who did some cool things. Your achievements and character are what you will be judged upon, not your heritage. This is a terrifying thought to the pathetic doctrine of racism and its irresolute parishioners who have nothing but their ethnicity as their defining personality trait. Pathetic.

Being mixed is not something I had to achieve. My parents were of different racial backgrounds, they engaged in the same lusty relations as everyone else and bam, I was born! That is all. My ethnic makeup does not tell you nearly as much about me as the ideas I have, or the music I listen to, or who I choose to spend my finite time with. And I certainly am not 'proud' of it. I hold my head high based on my work, my hobbies, and achievements, as should any individual who is actually trying to make their mark on the world. If anyone reading this is in disagreement, then look elsewhere, because you will find no solace for your pitiful racial pride here.

On a final note, regarding racism in the Church of Satan, I can attest to the following. I personally have not met one Satanist, online or off, who I can confidently say is a racist. And the Church of Satan has members of many different backgrounds who are all molding the world, crafting their is-to-be as they see fit. I do not care if I am the only non-white member, or if every Satanist was black, or purple for that matter! I grow weary of this obsession with race that our society is banging the proverbial drum over. Luckily for me, I found a church where, to paraphrase the Doktor, ethic is more important than ethnic.

Stay out in the cold, race-baiters, I'll be warm with the fires of the Infernal Empire downstairs.