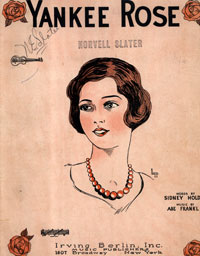 Over a year ago, I gave an old analysis of what the hell is the meaning behind Yankee Rose. So, giving it the old college try, I am going to share my results with you, my precious readers.
"Yankee Rose."
-The very last page of the Satanic Bible.
The final words of the Satanic Bible, "Yankee Rose," have been mulled over, analyzed, debated, and discussed by many a Satanist and even some non-Satanists, alike.
So what does it all mean?
Well, LaVey himself was a fan of Sousa and all of his rousing marches. He was even known to play them on his organ, with hair-raising results. I never actually listened to the original Yankee Rose until today, and it is, in fact, a march. A patriotic march to be exact, which Sousa was known for, especially his most widely beloved piece, Stars, and Stripes Forever. Now, Yankee Rose was not put together by Sousa, but it does have the patriotic flair of his work.
I do not see LaVey as a nationalist; he would shun such collectivism. However, as a fan of orchestral pieces, it would be surprising that he would choose to place a swingy old-timey piece like Yankee Rose within the Satanic Bible. Who knows, I'm pulling things out of my ass at this point.
Another explanation could be within the word of the rose itself. Roses have some symbolic meaning in occult thought. The rose, in some mysterious circles, stands for a trifecta of power and represents the three main alchemical properties: salt, mercury, and sulfur. Now, the first two have little-to-no bearing on Satanic magic, but the last one, sulfur, does. At least in my opinion. (shut up! I'm doing the best I can) Sulfur can be akin to brimstone, with its burning qualities, and what is one of the primary symbols of Satanism? That's right! The Sigil of Brimstone; Which is an alchemical symbol.
Take a look at the symbol itself: It could be construed to be a weird flower. Or maybe a dick. This sigil could also take the form of fertility and growth, much like a flower. (which is more vaginal, but that's beside the point) Alchemy is also all about growth and creation. See where I'm going with this?
Now I doubt that any of what I am saying is true, hell, It's entirely up in the air at this point. But LaVey was an esoteric man, so there more than likely was some occultist leaning in this mysterious last passage. So he might have melded a song he loved with an occult symbol that he thought was cool, using botany as a cover-up to fuck with our collective minds. Or maybe he just wanted to be random and put the title of a song he liked.
The world may never know.
That was my two cents. Please add your pennies to the jar by commenting below.