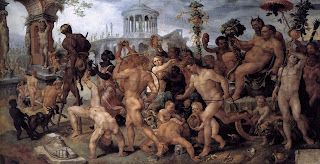 Harken back to the tales of the ancients. The Greeks had a plethora of deities, all filled to the brim with very human foibles and appetites. Zeus was a shape-shifting pervert; a notorious womanizer and sired many demigods. Pan was a bisexual, size-queen who got down and dirty with the ladies and the fellas. The accounts of the Greco-Roman gods' sexual escapades were endless.

In Africa, the Ioa, patron spirits of Voodoo lore, are known to get down and dirty; and enjoy smokes, booze, and telling dirty jokes.

So what do all of these seemingly different cultures have in common? It's the fact that their old religious all celebrated the physical side of life. The animal side of one's nature. Yes, the spiritual (which is unsatanic) is believed and utilized; but our carnal nature was just as celebrated (which is very Satanic, indeed). In ancient pagan religions, gods were more human than anything else. The gods did not put on airs of holiness but were honest in their appetites, and appreciated humans who would bring them fleshly offerings such as wine, money, or any other physical offering. A prime example of this is Baron Samedi, voodoo patron spirit of the dead; who, instead of being a morose party-pooper like Christ on the cross, loves to have a good time complete with smokes, booze, and licentiousness.

It should if you are a Satanist. Although Satanists do not believe that these deities are real, in some way (at least I can) Satanists relate to them as archetypical representations of our carnal sides. It was not until the ecclesiastical endeavors of Christianity came along that the ubiquitous “good guy badge” was hoisted upon the communities of reluctant pagan practitioners. But beneath the veneer of holiness and societal piety, there have always been those in the shadows looking for a good time amidst any joyless and stifling era. The tricksters, the rebels.

The Hellfire Club, with its lavish revelries, spring to mind. And so does Bacchanalia, the lascivious ancient Roman sex party in honor of the god of shindigs, Bacchus. Oh, and lest we forget Saturnalia before it was rudely hoisted from its rightful place as a fun party into the realm of "Jesus' birthday. All in a lame attempt by the Catholic church of proseltyze the pagans to Christianity. The ancient world is replete with over-the-top festivals of indulgence.

Satanists may not be pagans in the traditional way but in a sense, we do honor the lust for life that the old-time nature worshippers did. By starting the Church of Satan back in 1966, Anton LaVey took an honest look around and saw that people were tired of all of the pen-cramping sanctimonious religiosity. So he shaved his head and announced the Age of Satan! And there he would build a church dedicated to the glorious indulgence of the flesh! A religion that combats the repression of the ego, be they from religious and even secular sources. LaVey took what worked and was fun, and threw out that which was no longer necessary.

So, my dearest reader, time for your diabolical confessional. Share what sins you have committed this week. What have you indulged in? What gets your lust for life going?

I await your answer downstairs.