February 11, 2019
Greetings! I'm so glad you have found your way at the crossroads yet again, dear reader, and this time I have a special guest joining me today. Aden Ardennes!

For those of you who may not know this man, Aden Ardennes is a publisher of a very naughty periodical called HORNS Magazine, which specializes in homo-erotica that caters specifically to gay and bisexual male occultists. Moving along in other endeavors of a sexual nature, he has also written a book called Militant Eroticism; a tome filled essays and observations about sexuality, fetishes, relationships, and the overall craziness that can occur between the sheets.

His websites can be found here but (and I think you already know this) they are not safe for work! 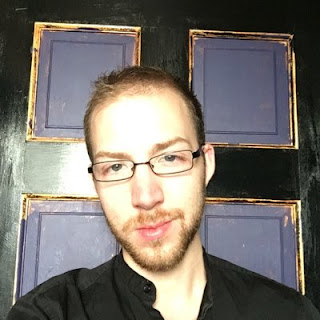 With the pleasantries now out of the way, won't you join us as we take a walk down on the third side?

1. Let's get to the nitty-gritty. How did you discover Satanism?

Well, much like many others I discovered Satanism through a fascination with the odd, the occult, and philosophy. The fantastic and dark aspects of life certainly contributed. I think that is the general way many of us have stumbled across LaVey's work. Satanism was more of a common ground for a few of my interests, it was only a matter of time before I came across the philosophy. A love of fantasy, a penchant for psychology, a commitment to reason without abandoning a flamboyant zest and emotions; all these elements were things I was tracing in a myriad of topics. The Satanic Bible was just another book I picked up at Borders books and it weaved those threads together.

2. I have heard on recordings of the 9sense podcast that you "love the occult" what are some of your favorite aspects of the dark arts?

In general, I love power over others, fetishize manipulation, and have a deep seeded fascination with the aesthetic. The Occult feeds into those little quirks of mine. A hidden way to get what you want in a manner that develops your will and charges you with knowing the cost, demanding that you have no apologies for it. What isn't there to love? Spooky self-development without apology, regrets, and a brutal sense of honesty without regret. Sign my name on that line.

3. As a bisexual man, I have to thank you for coming up with the idea of Horns Magazine. It is really refreshing to see something that is for gay and bisexual men that don't tow the party line. When and how did you come up with the idea? What were some of your biggest inspirations?

That is a long and somewhat embarrassing story, so I'll only include the more embarrassing details. HORNS magazine is something I've wanted to do since I was in my teens. A magazine that wasn't beholden to any tradition and committed to dick-sucking, ass eating, faggotry without apologizing for its commitment to witchcraft. I got encouragement from Magister, Dr. Bob Johnson and High Priest Gilmore while at the Black House, where I passed out during a conversation due to staying up for 48 hours and crawling around a castle all day. Magister Johnson, Magister Smith, and High Priest Gilmore were floating the idea of a gay twin to Old Nick. I took up the mantle, made it my own, and created HORNS.

If you want to know my inspiration, do your reading. There is a reason why biographies of great Gay activists who also participated in the Occult are the first articles you read.

4. Militant Eroticism is on my to-read list. (I'll get to it soon, I promise!) Are there any other books you are working on right now?

Not at the moment. My focus is HORNS magazine. Though, I'll probably update my ideas. Remember that I wrote "Militant Eroticism" when I was 25 and many of those ideas were based on observations preceding when they were penned. Now I'm 30 and my sexuality, as well as escapades, have taken me places I never would have predicted. So, we'll see what is in store.

5. Considering you, I know this is going to be corny as hell; but tell us a joke.

"I found out who has been throwing soil in my garden bed...the plot thickens."

First time I saw that joke I laughed so hard I was crying, a good friend almost threw me out of the car. I could barely tell the joke to him. I still laugh to till the brink of tears when I repeat it. My sexuality is only complicated to make up for the simpleton I am elsewhere.

6. I'm a film buff, and I am ALWAYS on the lookout for new movies to explore. What are three of your favorite movies?

That is tough as I'm not a film buff. I tend to watch whatever catches my eye. The films I can watch over and over are:

7. I know you specialize in written publications such as the earlier mentioned, Horns Magazine and Militant Eroticism; are there any other projects, aside from writing, that you'd like to share with us?

Nothing at the moment. Beyond HORNS I'm focused on my career, I'm a freelance writer under my legal name, and between the two it takes up most of my time.

This is a fun question for me because I only went into unnecessary detail about being a promiscuous power bottom. No other Gay man, when I came across Satanism, was so outspoken about being their homo-doings. I understand why they weren't, but I figured why not fill a pleasant void.

What I argued in Militant Eroticism is to explore where your lusts take you. Mine started edging towards topping, dominating my lovers, and exploring the lines of my sexuality. So, I did and discovered new places to play. These days if you're going to ask my bedroom position and sexuality, the only good answer would be "pervert".

10. When it comes to familiars, cats or dogs?

I've had the same feline familiar since I was 13 years old, so I suppose I'm a cat person. I spend time at a local doggy daycare and deeply enjoy the k9 run as well, so it's tough for me to say for sure. I think that I'm best suited to cats and that I love dogs the way I love children- great to visit and not great to own. I connect with cats in a deeper way than I do with dogs. The K9 is a breed of animal more akin to a best friend I can't be around all the time, but appreciate nonetheless.

Don't let your identity be dictated by supposed tos and shoulda wouldas. Explore yourself and pick the label as it suits you, no dynamic person is static.