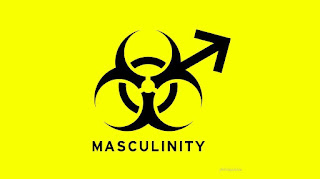 I am not the most ripped, deep-voiced, red-blooded, testosterone-fueled, macho man. I am a slightly effeminate, well groomed, semi-whispy little man-thing that is not afraid to admit that he likes the occasional chick flick; or that he feels more at ease being a homebody complete with cooking and cleaning. I am not much of a skirt-chaser either. Admittedly, I am more adept to being alone and perusing my interests.

On the opposite side, I like some things which are traditionally considered masculine. I enjoy watching the occasional hockey game, smoking a cigar with some choice fellas down at the lounge while we discuss politics, and (occasionally) scoping some of the eye-candy that steps into a bar while I am downing a beer.

What is the overall point I am making? It is this: In the eyes of the modern progressive liberal (more regressive if one were, to be honest) the beginning paragraph is viewed as a set of entirely forward-thinking activities for me to partake in as someone who owns a Y-chromosome. The second set of events, as innocuous as they may be, are viewed as what is now being called, in the modern pop-sociological claptrap as "Toxic Masculinity."

I have a few criticisms about that very phrase.

However, before I engage in proverbially raising my hands to participate in fisticuffs of discussions with my detractors, I wish to give a few nods of agreement. I do believe that there are a toxic representation and expression of masculinity. Telling men and boys that they should always mask their feelings with stoicism and that they should be at the ready to wield their strength in a fight to 'prove themselves,' unnecessarily I might add, is not at all healthy. I will give that point to some of my ideological opponents.

Unfortunately, the more rational members of the 'toxic masculinity' crowd have been drowned out entirely by the bleating and screeching cries of the progressive activists. As with anything that may have started with the best of intentions on the internet, that very same information highway has been traffic jammed by some bile spewing thought-cars that are due for a tune-up.

Ever since the crazies took over the asylum, anything and yes, I mean ANYTHING that slightly describes traditional masculinity has transmogrified as a disease, a plague, or toxic. So drinking a beer with the guys while cracking jokes at each other's expense; toxic! Enjoying a sports game where other men (or yourself) tackle in assertive competition; toxic! Commenting on how good looking a woman is and, dare I say it, asking for her phone number; not only is THAT toxic, he's adding to rape culture!

The current mental state of these good-guy-badge-wielding-wackos is deficient. It seems like their constant usage of the 'toxic masculinity' phrase is more of a means to berate and bully, not so much to help men get in touch with their emotions.

It is my personal opinion that this browbeating comes from weakness, both emotional and physical. After all, haven't you, dear reader, noticed that the men who always preach about the dangers of toxic masculinity are generally, decidedly unmasculine and the women who continuously harp on masculinity are decidedly unfeminine? These 'social justice warriors' could not cut it in the mating game, so they resort to attacking anything they perceive as a threat which reminds them of their lack of confidence.

Oh, I can see the rationalization hamsters of these self-emasculating men, running frantically in their proverbial wheels: "Maybe if I make the women hate those jocks and frat boys, she'll choose me! I'M not like THOSE men, no! I'm an enlightened man! I'M not after sex that would be objectification! So that's TOXIC!"

Allow me a moment to figuratively roll my eyes. Such delusions of hypocritical self-deceit would give even the most ardent of televangelists a run for their money. You're neither masculine, nor viewed as attractive, so instead of trying to find someone who fits within your place on the personality clock; you attempt to even the playing field by dragging others down to your level instead of building yourself up, and quite possibly finding a partner in the process. These are similar to the tactics of aesthetically challenged radical feminists who hate pretty girls because they wish to be attractive. They lack the genes or honest self-evaluation to bring the change they want to see. The fact that they have very sour personalities to match most certainly adds insult to injury.

So how does all of this relate to Satanism? Simple: Satanism does not pigeonhole its adherents based off of sexuality, gender, gender identity, or expression of any of the factors mentioned above. Unlike most other religions, Satanism is not interested if men are the "man of the house" or "the breadwinner." If a man CHOOSES to be in a relationship and CHOOSES to start a family, it is up to him and his respective partner to discuss the responsibilities of the home they are building together. Satanic men are not expected to be the breadwinner and the breadwinner alone; hell, if the woman of the house is better at making money, you won't find me trying to stop her! I have experience in the early childhood education field, after all, and find no loss of manhood at the prospect of being a stay-at-home father. Hell, I'll probably do a better job!

One of the things that appealed to me the most about Satanism is the stress on individualism. Most other religions would put both men and women in a respective vise of gender roles, regardless if it lands the individual man or woman in a personal quagmire. In spite of our so-called "progressive" age, I have heard the phrase "real man" still passed around like a joint at a new age music festival. Hogwash! Says Satanism, the individual Satanist decides how he will express his masculinity. So whenever I hear a woman (or another man for that matter) tell me I need to be a "real man," I merely scoff at such conjecture. When taken aback that their shaming does not make me fall back into rigid gender norms, I ask them:

Usually, some odious laundry list comes falling out of their collective pie-holes about "protection, provision," or how I'm not "manly enough." If your definition of what makes a man has to deal entirely with whether or not he will fit into the hunter, rich guy, or bodyguard role; then do not be surprised if some men will view you as a walking sex toy in an equally unfair manner.

A Satanist tries to view the world through the lens of the third side. This much-neglected perspective does not tell men that such and such an action is the way a "real" man acts nor does he take the equally odious opposite of the self-debasing, woman worshipping, a groveling man who will self-sacrifice and belittle himself so that he can appear as an "ally" to all womankind. A Satanic man also refrains from such nonsense of putting himself into constraining male archetypes. He is not a thug, a bad boy, a nice guy, a sensitive, or a jerk. The Satanist male determines his worth and will be judged on the depth of his mind, the value of his actions, and content of his character; not what is between his legs or the perception of others based off such.

So to say that masculinity is toxic because some men do violent things is akin to saying that feminity is toxic because children are more likely to suffer abuse at the hands of their mother than they would a father. Does this mean that most women will abuse children? Of course not! The news has reported both instances of fatherly and motherly abuse, but only one has the dubious honor of causing an entire gender to mislabeled with a harsh label and sexist label.

As a friend of mine has stated, it is not about men or women being toxic, and it is all about whether a particular behavior is poisonous or not. Moreover, as a Satanist, it is up to him to figure out whether or not any action is. After all, there is a reason why the cardinal sin of Satanism is stupidity.

November 21, 2019
"Satanism? You sure picked the whitest religion to join!" Said a friend of mine, in jest, when I disclosed to him my membership in the Church of Satan. I chuckled at the joke, it did get me thinking as to why there are so many melanin-challenged individuals within the ranks of the Alien Elite. Not that this is a pressing issue, mind you, but it is something I have thought about. I have heard this sentiment shared before from others. So I, dear reader, as someone who is a mutt of a Satanist, will, to the best of my ability, probe into this matter. Satanists are born, not made. This is a common adage amongst Satanists, and I believe it stands true. The trait is rare amongst humans, most of which can be nothing more than—as Magus Gilmore puts it—“Media Bessoted drones." (from his essay, Satanism: The Feared Religion) And what in the media is being more and more discussed? Race. I tire of such discussions, but somebody has to do the dirty work, so I guess it is goin
1 comment
Read more

August 08, 2019
(Although I am a member, I do not speak for the Church of Satan) During the final week of May, I went to a gathering of Satanists. All attendees were dressed up to the nine's and had cheerful faces. Food and drink were in abundance, booze, and smokes were a-plenty, and there was, overall, jovial energy that permeated the entire household. To onlookers who observed some of us congregating outside, they saw a group of snazzily dressed individuals. But to those of us involved, there was something far more 'diabolical' going on. (cue thunder, lightning, and maniacal laughter) The roles were set, the candles lit, the altar was put upon her mantle, and I had donned white robes. This was a stark difference from the ebony garments that draped over the other attendees. We were going to have a ritual, and it was going to be one helluva good time! But this ritual was larger-than-life, for me especially. Not only was it going to be my first group ritual, but the occasion was also
1 comment
Read more