I Can Social Distance! 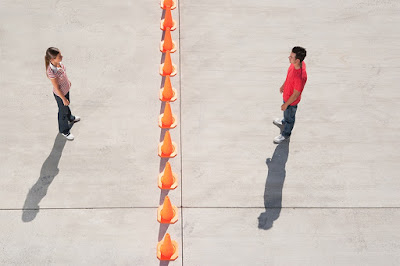 (Although I am a member, I do not speak for the Church of Satan)

With the advent of the dreaded COVID-19, most of us have been constrained to our homes. I have been asked by my family how I am holding up during this time of uncertainty. My response has been simple: “I'm doing good!” Satanists are no strangers to the idea of social distancing, as one of the cornerstones of our religion is individualism. The very nature of our church is non-congregational. Considering the stupidity of some white-light churches concerning this pandemic, we've been well prepared towards flattening the curve for decades now. Yes, the Church of Satan has always had a contingency plan for stupidity! And with COVID-19 stupidity might, for one of the rare times in history, actually be painful.

I realize that some of the other members of my cabal have already given their thoughts on this issue. But I like cents, so expect to be just a little bit richer when I'm through giving my two. But when it comes to this debacle, I started thinking about my life, and some of the ideas of Satanism while I remain sitting pretty in my lair. One idea that is prominent in my mind is that of misanthropy. Anybody that knows me knows that I am a misanthrope, but sometimes I question if this is the best mode of thought. It is one that I struggle with.

I struggle with it because I believe that I am aware that I can be too much of one. There are times when I gaze upon the herd and feel nothing but utter disgust, but a different kind of feeling has been bubbling forth within me during this time. I've been feeling more contentment. I cannot speak for others, and your experience may vary, dear reader. This is one of those rare times for me where I have noticed the general populace has been going through a renaissance of sense. Do not get it twisted, there are plenty of puerile people out there who stamp their feet and downplay the seriousness of this poisonous pandemic.


A prime example of this is the idiotic spring breakers a few weeks back in Miami, Florida. That especially made me cringe since these morons are supposed to be the college graduates of the future. (if they can stay alive long enough that is) For every dumb spring-breaker, there were a plethora of the other members of society who agree with my thoughts that nature should take care of such morons. Some would say I am solipsistic thinking that the masses are adopting my worldview, I just view this is a small spark of light in the dank halls of idiocy. There is a big difference between a little bit of optimism and solipsism.

The herd accepting the consequences and letting idiots die off? What kind of topsy-turvy world am I living in! A pandemic has that kind of power, and the lesson being taught has not just been restricted to the spring break example. I have done research in the field, dear reader, so that you do not have to. Going grocery shopping for the last few weeks has been an adventure, and while visiting human hives (Walmart, the supermarket) to gather supplies, I have noticed some good things. Most of the populace has not only been civil, but have been observing the rules of distancing, hand-washing, and the overall sanitary conditions required to get us through this bacterial ordeal. Goodness, gracious, some sense has been beaten into the brains of even the most thick-headed! Even my mother, a devout Christian, has been pointing her finger and saying that the churches who congregate in person for services should be taxed. In her words, “The preachers who ignore the warnings are murderers who are leading their flock astray!” If this pandemic is urging my mother to adopt the second point of Pentagonal Revisionism, I view that as a silver lining. It is a small example, but I will take what I can get.

In regards to silver linings and my personal life, I have taken this lockdown to not only work on my writing projects but also hang with my roommates. I have found that the old adage of “more than meets the eye,” is apt in regards to one of them who I misjudged as kind of a dolt. I discovered that he studied art in Italy and he showed me the pictures of his time there to prove it. This lead to a stimulating conversation about classical art and the history behind some of the greats of the art world, which then snowballed into history about ancient civilizations which we would have liked to visit, etc. When it comes to the quarantine, and each individual Satanist, the social wheat from the chaff shall be separated. I urge each Satanist to take this time to not only hone skills but also recognize who is most important in their personal lives and cherish those who matter the most.

One of the things that this event has taught me is that it is crucial for me to not let my distaste for the herd become a compulsion. Even they have surprised me a bit. When this is all said and done, I plan on this being an educational opportunity for me to keep pushing along and making this life the best one for myself and those I cherish. After all, we should remember to avoid the sin of “forgetfulness of past orthodoxies.” I encourage other Satanists to keep doing the same. It's going to take a lot more than this snag of uncertainty to bring us down!

November 21, 2019
"Satanism? You sure picked the whitest religion to join!" Said a friend of mine, in jest, when I disclosed to him my membership in the Church of Satan. I chuckled at the joke, it did get me thinking as to why there are so many melanin-challenged individuals within the ranks of the Alien Elite. Not that this is a pressing issue, mind you, but it is something I have thought about. I have heard this sentiment shared before from others. So I, dear reader, as someone who is a mutt of a Satanist, will, to the best of my ability, probe into this matter. Satanists are born, not made. This is a common adage amongst Satanists, and I believe it stands true. The trait is rare amongst humans, most of which can be nothing more than—as Magus Gilmore puts it—“Media Bessoted drones." (from his essay, Satanism: The Feared Religion) And what in the media is being more and more discussed? Race. I tire of such discussions, but somebody has to do the dirty work, so I guess it is goin
1 comment
Read more

August 08, 2019
(Although I am a member, I do not speak for the Church of Satan) During the final week of May, I went to a gathering of Satanists. All attendees were dressed up to the nine's and had cheerful faces. Food and drink were in abundance, booze, and smokes were a-plenty, and there was, overall, jovial energy that permeated the entire household. To onlookers who observed some of us congregating outside, they saw a group of snazzily dressed individuals. But to those of us involved, there was something far more 'diabolical' going on. (cue thunder, lightning, and maniacal laughter) The roles were set, the candles lit, the altar was put upon her mantle, and I had donned white robes. This was a stark difference from the ebony garments that draped over the other attendees. We were going to have a ritual, and it was going to be one helluva good time! But this ritual was larger-than-life, for me especially. Not only was it going to be my first group ritual, but the occasion was also
1 comment
Read more