Defiant to the End! 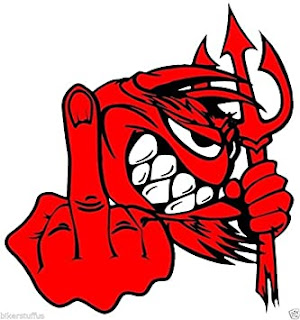 This is going to be more of a stream of consciousness kind of writing, a rant. But it burned within me until it reached my fingertips, aching to be out!

On July 4th, it will be my first anniversary becoming an active member of the Church of Satan. Makes it really easy to celebrate and there will be fireworks! Simultaneously, the bombs will burst in the air, just like the black flame that crackles within me. I thought about my choice of joining. I can happily say that it was one of the best decisions I made in my life. I thought about options and where my life is going because one of my friends had an in-depth conversation with me that angered and saddened me at the same time.

He made a wager, not knowing I am a Satanist, that he could convince me to be a Christian. I was polite, but inwardly I was becoming indignant. He asked for my honest opinion as to why I do not believe in god, let alone his chosen deity. I told him the truth, after all, I did not give my opinion unless asked. I told him, in oh-so-many words, that his god was a “bully and a coward. A celestial dictator who creates people sick and commands them to be well.” He retorted with the nonsense argument of “free will.” He insisted we keep talking, so I continued my honesty. “Free will is moot for a creator god who KNOWS everything that I am going to do. He designed me with all of the flaws, desires, and emotions, threatening me with hell if I do not comply. Even if your god did exist, why would I want to worship such a villainous being?”

He gave pause, and to be fair, he was never pushy or rude about his religion. So I let it slide. It got me thinking about all of the people throughout my life, which were rough towards me for not buying into their snake oil sales pitch. It also made me feel for the millions of people who have died, been tortured and raped over bronze age fairy tales. I always shook my head when I saw people I knew, talk about how "God has blessed them." Give yourself more credit, the sweat of your brow is what led to your success!

Let me make this perfectly clear. I don't hate all Christians. But I loathe, despise, and abominate the Abrahamic religions! I am under the belief that they are the cause for most of the ignorance, slavery, torture, and vile abuse in the world. They must be held accountable! I am so happy that Christian churches across the West are suffering from empty pew syndrome and will continue to do so as secularism rises. The Abrahamic religions, especially Christianity, are malignant memes that must be wiped clean from the minds they continue to try to infect. However, dear reader, we must remain vigilant! Any idea that demands conformity, collectivism, victimhood, and the trampling of freedoms must be avoided. They are the creeping pestilences of the human mind. This includes political and social ideas that act as salt upon the soil of free thought. Just because it is secular, it does not mean it can't pantomime the rabid nature of religiosity.

I was raised in a Christian dictatorship for twenty years of my life. The minute I gained enough resources to leave, I left faster than a runaway slave. When I discovered Satanism, I never looked back. A few years later, I applied for active membership because my desire to keep the black flame stoked inspires me every day to do what I can make this life the best. And I will be damned if I ever go back to bending the knee to some supreme cosmic leader. As it says in the Satanic Bible, "I am mine own redeemer!"

If for some reason, my well-meaning (but deluded) friend's belief in the afterlife is correct, I will gladly stand tall in defiance of that dictatorial diety. After all, “better to reign in Hell than to serve in Heaven.” If there is a hell, I am sure we will all be there, and when it comes to company, at least my dear readers will be of the engaging sort. You devils make this world a more exciting place.

So as we celebrate this 4th, I'll be alongside you in spirit. My celebration now has an added meaning, and I can't wait for the many anniversaries to come!

November 21, 2019
"Satanism? You sure picked the whitest religion to join!" Said a friend of mine, in jest, when I disclosed to him my membership in the Church of Satan. I chuckled at the joke, it did get me thinking as to why there are so many melanin-challenged individuals within the ranks of the Alien Elite. Not that this is a pressing issue, mind you, but it is something I have thought about. I have heard this sentiment shared before from others. So I, dear reader, as someone who is a mutt of a Satanist, will, to the best of my ability, probe into this matter. Satanists are born, not made. This is a common adage amongst Satanists, and I believe it stands true. The trait is rare amongst humans, most of which can be nothing more than—as Magus Gilmore puts it—“Media Bessoted drones." (from his essay, Satanism: The Feared Religion) And what in the media is being more and more discussed? Race. I tire of such discussions, but somebody has to do the dirty work, so I guess it is goin
2 comments
Read more